By Roaring River Vineyards on November 20, 2016 in The RRV Story

In the fall Tom decided it was time to clear part of the land for cultivation.

We hired a forestry specialist to manage the logging operations because we did not live on the site and could not be there while these activities were going on. Once the plan was put in place the loggers came and cut all the trees in designated areas.

Out of the 47 acres we cleared between 15 and 17 acres total for future agriculture purposes, roads, housing and ponds.

After the loggers left, it looked like a war zone, there was debris everywhere.  We had to hire a graders with heavy equipment to come in and pile-up the debris, dig a very long trench and push the trees into it.

The wood pile was set on fire and it took over three weeks for the fire to subside.  Later, the trench was filled-in, and we proceeded to grade the entire hillside, creating some terraces on the steeper slopes.

The grading crew also establishes a road that went up from the entrance all the way to the top of the hill. Another road was established going down the others side of the hill back to the entrance, in effect creating a circular roadway around the future “vineyard” area.

They dug retaining ponds between the vineyard and the creek to effectively capture any run-off from the slopes and guide them through trenches to the retaining ponds.

We hired a grass-seeding company after the clearing work was completed to stabilize the soil until we could start developing the vineyard.  We purchased a cattle gate and lock to secure access to the property. At this point we reached an important milestone — completing the land clearing.

Pictures are as follows:

1.) Josephine Silvey standing at the future entrance of the property just purchased. 2.) Thomas Silvey and dog (Bobo) looking at the deforested property. 3.) View of the cleared property from the entrance looking up to the future vineyards. 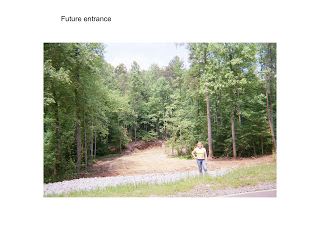 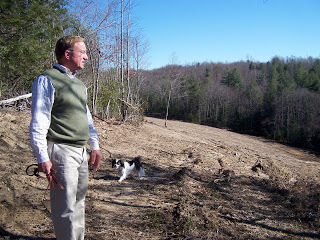 MENU
Notice: The restaurant and tasting room will be open for Memorial Day, Monday May 25. 2020 from 12pm until 6pm. Our vacation rentals are open every day. In an emergency please contact owner Tom Silvey at 336-469-0775. Thank you.
close
Toogle Down