By Roaring River Vineyards on November 20, 2016 in The RRV Story
Early on we realized we needed to have a Master Plan for the property.  So we commissioned someone to create one for us.  We met with the contractor and discussed what we wanted and his job was to take our information and represent it in a graphical representation that gave us the altitude of the land, where the building were to be built.  This is the guide that we have been using ever since.
On the upper left corner is a rendition of the wine label we created with the name of our future vineyard “Roaring River Vineyards”.  The name was chosen because the property is bordered on the left by the Roaring River shown in Blue to the left. There was a sliver of a property owned by our neighbor located between the river and our property. If you look closely at the ponds, you will see a hatched line that starts at the left pond.  If you follow that black hatched line you see the 3-acre property that ends at the river just above the midway point of the river. At one time this 3-acre property and our 47 -acre vineyard property were one property.
Some years before we bought it Jonathan Stuart fell in love with this site and had the owner carve out that 3-acre lot from the 50-acre land. He wanted to live on the water and thought this spot was really beautiful.  He did not , however, want the entire 50-acres, only the scenic 3-acres. He planned to build his dream home on the river and look for a wife. Soon after we bought the remaining 47-acres we became acquainted with Jonathan and quickly became friends.
We asked him one day how he was able to talk the owner in carving out this valuable part of the property because in doing so, a good portion of the riverfront was cut-out.
He told us he had dated the woman who owned the property and that is how he was able to buy it. We met her later on as she lives near us. She denies this, but we think that it was probably true because the division of the property did not make sense. Doing so took a large portion of the riverfront away from the 47-acre lot which made it less valuable than before. So there had to be a strong motivation for doing so and we will never know for sure.  We will let the reader come to his/her own conclusion on that matter!
THE ROARING RIVER GRAPHICAL RENDERING 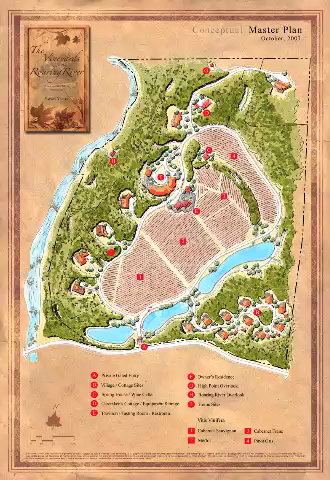 Description of the Rendering:
It shows where the main house was going to be (the one that looks like a semi-circle).  Just below it to the was the place recommended to put our wine-tasting room.

There are 4 more houses on the left that we were keeping for our 4 children to build a vacation home.  The ponds was something the artist put in to make the place look nice.

On the bottom right is the place we selected to create a “French Village”.  The idea was to sell a few lots for: 1) have a few neighbors to socialize with, and 2) to fund the construction of the winery and wine-tasting room.

The other buildings above our future home is the barn and residence of our Vineyard Manager.

The pink areas are the various vineyards representing the different grapes we would grow.

How does our property look today as compared to that rendering?

In March 2011 we found out that Jonathan Stuart died suddenly from stage-4 lung cancer.   We lost a good friend and miss him very much.  A long time ago we had asked Jonathan to give us first right of refusal if he wanted to sell the property. Which meant, should he ever opt to sell his house, he had to offer it to us first before offering it to the public at large.  It was never put in writing,however, it was an oral agreement.  Jonathan had been living in a mobile home while he was building his dream house.  The construction was not finished when he passed away. We met his son when he came up from Florida to assess the situation. He decided to complete the construction of the house and determine the financial disposition of the estate.  His intent was to keep the house in the family. He tried very hard to do so but in the end it did not work out financially and he decided to sell.

So in November 2010 we bought the house. Although, the house had an occupancy permit it was not completely detailed and did not have any appliances. So our first order of business was to finish the work that still needed to be done, buy all the appliances and paint the interior, stain the 2nd floor wrap-around porch. There was no flooring around the house’s 1st floor wrap-around porch, no driveway or path leading to the house.  So we went into construction completion mode.

Finally, the 50-acre property was reunited.  With it came the ruins of the Brewer Grist Mill which dates back to 1793.  The mill was intact until Jonathan bought it.  There was, however, another person who wanted to buy the mill and when he failed to obtain the house,  he opted to burnt it down and skip town. He has not been seen since then as the story goes!

There was also the Brewer Sawmill on the other side of the river – also in ruins.  It was operated by the water from a dam above them which was destroyed by the great flood of 1940,  Apparently many mills were damaged by this flood. The Miller’s house next to the sawmill is still intact.
On December 28, 2012 we purchased the sawmill property and the miller’s houser, in doing so, we reunited the mills as well.  Now our property is complete.

Preview of next episode:  The story of Jonathan Stuart

Episode 5: We Need a Place To Stay
Episode 7: The Story of Jonathan Stuart

MENU
Notice: The restaurant and tasting room will be open for Memorial Day, Monday May 25. 2020 from 12pm until 6pm. Our vacation rentals are open every day. In an emergency please contact owner Tom Silvey at 336-469-0775. Thank you.
close
Toogle Down