By Roaring River Vineyards on November 21, 2016 in The RRV Story

We have been waiting a long time to get the certificate of occupancy from Wilkes County.  When we got it we immediately called Duke Energy to get our electricity connected.  We had temporary service but now we needed to have the permanent lines installed.

The field engineer (who shall remain nameless) came over to discuss how we were going to connect the building.  He already knew we were not a fan of electrical poles and overhead lines since we paid an exhorbitant amount to have one pole moved from where it was (in the middle of our parking lot to a different location up further on the hill out of car traffic). It took six months to get to an agreement as to location, method and price.  We are two miles from Stone Mountain which is a massif granite dome, and we have some of the same terrain which does not make it easy but it is doable if you try hard enough. Emphasis on “try hard enough!”.

The next day, Duke Energy came to install power, but they had the wrong work order, the work order was for the cabin which is not yet remodeled.  So we had to create a new work order for The Gathering Place.  This is an interesting process.

First of all, the Duke Energy machines were too large to fit behind our building so we had to manually dig the trench from the electrical box all the way around the building, install the electrical wires and encase them in PVC pipes up to the point where the machines could take over. Furthermore any pipes, water pipes, septic drain pipes, irrigation, or electric lines must be manually dug out and exposed before they dig with the machines.

The work order does not get processed until all the work is completed, then it is processed then you have to wait two weeks for the work to actually begin.  They do not call you to advise you when they are going to show up — it is anywhere within that timeframe!

One day, I had a dental appointment in town, and whenever I go into town I try to run all my errands since it is an hour round trip.  Wouldn’t you know this is the day they decide to show up and of course we run into some issues.

Upon my return, one of my workers informs me that when they dug the line they found one line that was not exposed and under which the power line could not be placed because it was not encased in PVC.  We offered to encase it in PVC but they would not accept this solution.

The FE proposed installing an electrical pole where the wedding tents where supposed to be erected & attached to the dance floor/stage we were planning to build. The FE had established his new proposal with my worker – not myself, and had not even thought of other alternatives.  This occurred on a Wednesday- the FE would not return to our site to discuss work-arounds until the following Monday losing precious time.

This was clearly a “non-negotiable”.

The electrician and I started to discuss the specifics of the issue and how we could solve it. I fount a work-around and we walked through how we could do it. It involved moving the connection box down about 25 feet so that we stayed behind the pipe that was not encased, moving the junction box by the foot the the hill. When we moved 25 feet from the cabin all the pipes there were encased –  so it was no longer an issue, and all the wires could be installed underneath the pipes.

Our FE took the path of least resistance, not one that worked for the customer.  Furthermore, he did not want to hear this solution from an intelligent, non-engineer woman, so my husband had to make an appointment to have him revisit our site to go over the new proposal with our electrician. When presented by the electrician the proposal went over well.

We had to, once again, expose all the pipes, water lines, irrigation lines, dig 30″ deep, and lay down the electrical wire they had left coiled up on a pole.  They were rerouted in the new ditch under the various pipes.

Of course, we had to process a “new request” not a “continuation” of the original request. You have to have the patience of a saint to get anything done right around here!

One of the things I failed to mention is that I paid a landscaping service to sow my new lawn.  We had waited all summer for the best time to sow which is the month of October, we had a 4 week window of opportunity.  We sowed our grass on September 22nd.

It had been growing fine until I realized Duke Energy would have to trench my new lawn, cut my irrigation lines in the process.  I did not mind that too much since there was no other choice but the germination window is getting pretty small.   They cut my irrigation lines in 3 different places.  I did not install the system so we did not know where some of them where.  So we had to fix 3 lines. Once you sow the grass you have to irrigate to get it to germinate.  I was fighting against the clock.

My goal after all is to have weddings next spring.  I really need my lawn to look good. The entire month of october was spent waiting for Duke Energy To install my electrical lines. It has been five weeks and I am still waiting.  I am at least happy to have sown my grass again and hope it will germinate in November.

Update: The site of our future wine-tasting room has an electrical pole and lines going right through the space where the second floor of the building is expected to be.  I know we are going to have fun with the FE on that project as well! 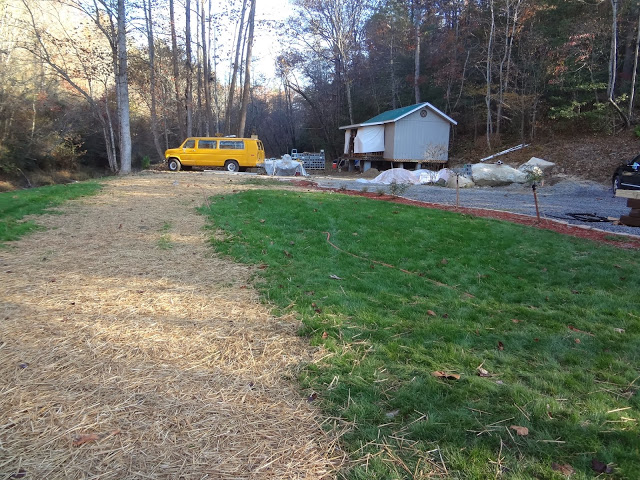 The straw covered area is where the electrical lines were buried, see where it veers to the left and crosses the driveway at the edge of the large rocks way to the right.  All that was dug 30 ” deep manually by our workers. 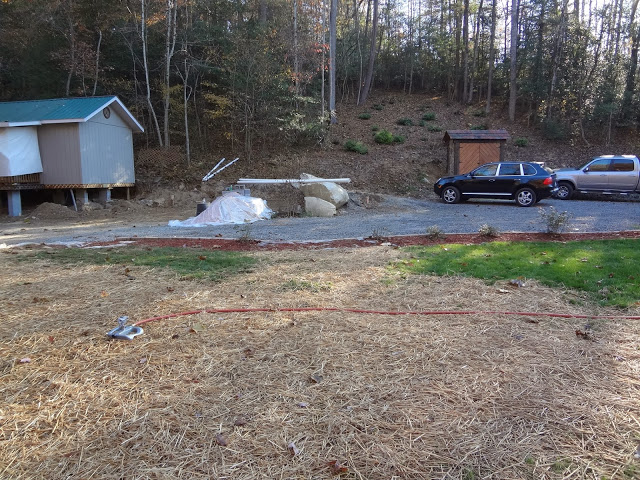 In this picture, just below the horizontal white pipes resting on the rocks, you see a small wooden stake in the ground, this is where the junction box will be install ( before was at the corner of the cabin)
Episode 13: The Next Projects For Our Events Venue
Episode 15: Event Venue Construction