By Roaring River Vineyards on November 20, 2016 in The RRV Story

Tom and I love to decorate with vignettes of nature.  Once while we were i Waynesville, we saw a fox, raccoon, a bobcat and some other animal shown in a canoe with one another.  It was so pretty – but they wanted a lot of money for it so we could not afford it.
Some time ago, Tom came home from work and said that he had traded a stuffed bobcat for 5 mason jars of moonshine that can be bought “in these here parts!” as they say down here. Seems like everyone knows somebody that makes it. Myself, I don’t care for it. Well that was until I was introduced to Apple Pie moonshine.  Well, that’s going to require an episode of its own!
A while had passed and I inquired about when we would get the bobcat and Tom said it would not be long.  Some time passed and I soon forgot about it.
One day, a few of the ladies invited me to join them for some “retail therapy” there was a sale in Talbots, Charlotte, NC so we decided to make the drive to get some good bargains.  We had an amazing time and a cart full of clothes.  We hit the mother lode! Thank you Olive and Mary for inviting me!
It was getting late, and Olive and her husband were going to meet another couple for dinner but there was not enough time to drop us off in Traphill, and back track back to Jonesville where they were suppose to eat.  So Olive asked us if we wanted to join them for dinner and call our husbands to join us, that would solve the problem. Arrangements were made and we found ourselves in Theo’s restaurant in Jonesville.
When Tom arrived, he told me that he had a surprise for me.  I was pleasantly surprised and asked if I could have it right then.  He said: “No, let’s wait after dinner!”.  After dinner the ladies decided to go inside a couple of really nice boutiques that sells interesting stuff for the house and take a look around. After a little while we rejoined our husbands in the parking lot by our cars.
We were near our Toyota Avalon, Tom was opening the trunk of the car and while doing so asked me if I would hand him his raincoat from the backseat of our car. I assumed he was getting my surprise out of the trunk.  So I opened the car door and leaned into the back seat to reach fir his raincoat.  When I pulled it to me, I came face to face with a thing glaring at me.  I screamed and got out of there fast,  But my eyes and my brain were not in synch so I went back inside to take another look and screamed again realizing I had been face to face with a bobcat.  I screamed again than started laughing when I realized he had just pulled a trick on me!
Tom is renowned for playing tricks on me.  He must have told the men beforehand because they were all looking at me to see my reaction would be. Well, I did not disappoint.  After the ladies inquired about what had happened I told them to look inside my car as well.  They took turns doing so, and more laughter ensued.
Then some of the people that were leaving the restaurant overheard the commotion and came over to ask us what was going on since we were laughing so hard.  We had no choice but to invite them to look as well with another round of laughter as they reacted to the bobcat.  This happened a couple more times with one round of laughter after another! Finally the laughter died down and we left for home.
Disclaimer:
For you animal lovers – no bobcat was killed in the making of this prank!
The bobcat was found by the side of the road as “road kill” and someone picked it up and had it stuffed.  He then gave it away to someone who happened to work with Tom. Somehow or other they got on the subject of the bobcat and an agreement was made. Apparentluy the guy’s wife did not want it in her house anymore so she made him get rid of it.
The following is a picture of the bobcat — remember it was dark in the parking lot. 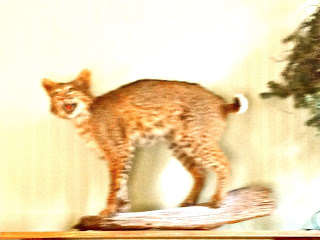 Here is a picture of the stuffed bobcat. 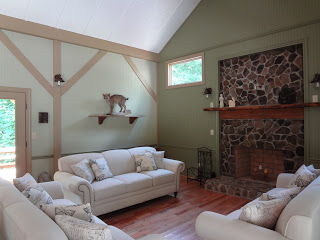 Here it is in our new building, where it has found a new home.
Episode 9: Construction Of The Rental House
Episode 11: The flood in the Gathering Room